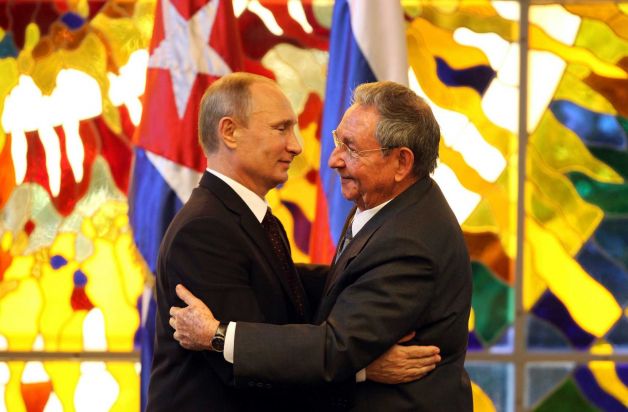 Latin American countries such as Brazil, Argentina and Cuba and others are already in the side of Russia

Latin American countries such as Brazil, Argentina and Cuba and others are already in the side of Russia

Russian oil company Rosneft will help Cuban State oil company Cupet explore the country’s offshore oil reserves, according to one of the cooperation documents signed between Russia and Cuba during President Vladimir Putins visit to Havana.

Putin concluded his first stop on his six-day tour to Latin America in Havana, Cuba, where he met the nations President Raul Castro.

Speaking at a press conference, Putin confirmed that many major cooperation deals have been signed between the two nations.

One of the most significant agreements allows the Russian oil company Rosneft to help explore and drill on an offshore oil platform on Cubas northeast coast. The area potentially has up to 20 billion barrels of oil, according to Cupet.

“Developing new blocks on Cuba’s offshore shelf is (expected) in the very near future,” Putin said.

During the discussions, Putin was joined by Rosneft head Igor Sechin in order to finalize the deal. Cuba has limited onshore production and relies heavily on imports from Venezuela for its oil consumption needs. Putin also confirmed that Russia is writing off 90 percent of Cubas debt, which amounts to $32 billion. The remaining 10 percent will be reinvested into the Cuban economy, the president added.

“We will provide support to our Cuban friends to overcome the illegal blockade of Cuba,” Putin said. Read more: Russia writes off 90% of Cuba’s debt ahead of Putin’s ‘big tour’ to L. America

Other documents signed on Friday include a bilateral statement on the non-placement of weapons in outer space and an intergovernmental agreement on cooperation in the area of international information security.

During the visit to Cuba, Putin also met with former President Fidel Castro, who stepped down due to health concerns in 2008, after 49 years in power.

Later on Friday, Putin made a surprise stop in Nicaragua on his way to Argentina. He will then go to Brazil.