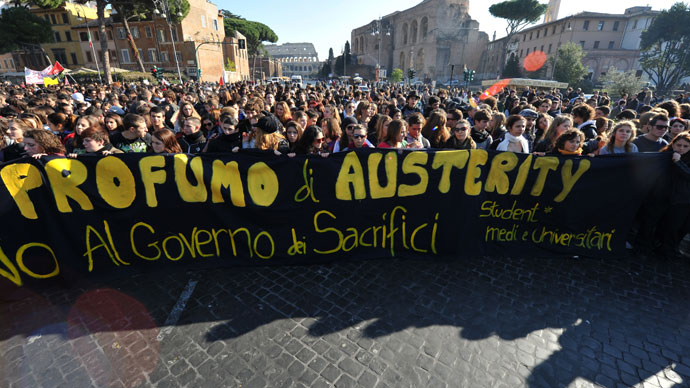 Students and protesters march in front of the Colosseum during a demonstration to protest against the cuts in the education budget and against the austerity measures in Europe.

As a severe recession and unprecedented unemployment sweeps Italy, millions of people are struggling to make ends meet. The number of those receiving food assistance has doubled in the past two years, according to a government report.

The data comes from national statistics institute ISTAT, which published an annual report demonstrating, among other issues, that Italy is witnessing youth unemployment of nearly 40 percent  the highest in Europe.

A reported 23.9 percent of young Italians are neither in the job market nor receiving education, the report stressed. In southern Italy, one in three young people aged 15-29 fell into this category.

Just over half (57.2 percent) of youths who graduated were currently employed, with the Europe-wide average standing at 77.2 per cent.

Fourteen percent of Italys population  8.6 million people  is living on food assistance, a number that has doubled over the past two years, according to the report.

Nine poverty indicators were taken into account while carrying out the study; if a family meets more than four, it is considered to be seriously deprived. Some 15 million people  25 percent of Italys population  are living in families that meet three or more of the poverty indicators, the research found.

The recession, which has now lasted almost two years, has taken a heavy toll on Italians, who are increasingly digging into their savings, ISTAT stressed. The savings rate, traditionally high in Italy, is currently far below that of France and Germany, Reuters reported.

The study results come just a few days after thousands gathered in Rome to protest austerity measures and high unemployment. Demonstrators urged Prime Minister Enrico Letta to create jobs to pull the country out of recession. Protesters held banners reading, We cant wait anymore and We need money to live.

According to a Friday poll conducted by the SWG institute, the governments approval rating has dropped to 34 percent, down from 43 percent at the start of May.

2018-02-26
Previous Post: It was a bad day for Italys hackers.
Next Post: Finally, the scientific team looked at making the system robus