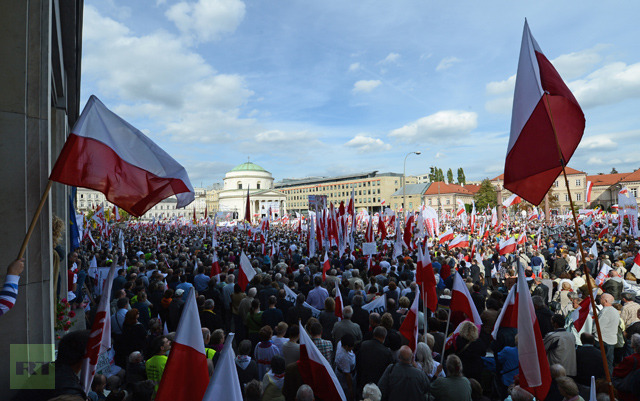 Many of western journalists has no clue, what was about the protest in Poland! It was not against “pro market” reforms which government of Donald Tusk has no intent to do, nor has any idea how to do them.

The protest was about:

Corruption scandals and insolent cover up of the guilty ones by the government.

Deteriorating democracy  and democratic values, lack of respect to the citizens supporting the opposition. Government use  of justice system and police force to prosecute citizens opposing the ruling party and  President;

Shutting down (in long run  by limiting its audience) one of the  few media left, that is not in bed with the government, which is TV Trwam.

In fact, that was the main reason, why this protest was organized, to defend TV Trwam, to whom the government controlled state media council, refused to issue a license for broadcasting  through  digital multiplexer. Of course that by itself, wouldn’t be enough to draw such crowd, if the government  by its scandalous actions wasn’t causing so much grief  in large part of society, or if it was doing good job governing Poland and its citizens were respected and happy. But it

is not. The only reason Poland is doing fairly OK economically,  is because of the massive debt, that this government is running since it got to power in 2007. But that can not be done forever.

2018-02-26
Previous Post: American taxpayers would pay about $1 billion a month to send in the military to Syrias ongoing civil conflict
Next Post: BGŻ is 98% owned by the Netherlands’ largest retail bank Rabobank and could be worth nearly $1 billion according to Polish media.