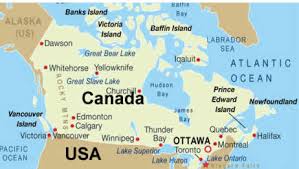 In the United States, instability was permitted by regulators because it served powerful political interests

By: Italian - Polish
In: Economics, English
With: 0 Comments

In the United States, instability was permitted by regulators because it served powerful political interests

Its middle class is thriving, its people are universally liked and its government actually works.

Fifty years ago, this description might have fit the United States. But not now Americas middle class is shrinking and its global reputation is spotty. Congress, meanwhile, creates more problems than it solves.

So for guidance on how to fix America, why not look north to Canada, where the mood is upbeat and life appears to be getting demonstrably better? The New York Times recently reported the Canadian middle class is now the worlds richest, surpassing the U.S. for the first time. In the 2014 better life index recently published by the Organization for Economic Cooperation and Development, Canada outscored the United States in 9 of 11 categories, including education, safety and overall life satisfaction.

The poverty rate is lower in Canada, and every Canadian citizen has government-provided health insurance, which might explain why Canadians enjoy longer life expectancy than Americans and are considerably less obese. As for the government, Canadas national debt amounts to about $18,000 per person, compared with $55,000 in America.

So what is Canada doing right?

It has a more stable banking system. Canada has virtually never experienced a financial crisis, and there were no bailouts north of the border in 2008 when the U.S. government committed $245 billion to save dozens of U.S. banks. The differences between the two countries are somewhat accidental. In the United States, distrust of a strong central government all the way back in the founders days led to a system of state-chartered banks vulnerable to political meddling, and therefore riskier than the big, nationally chartered financial institutions that operate in Canada.

In the United States, instability was permitted by regulators because it served powerful political interests, Prof. Charles Calomiris of Columbia University wrote in a 2013 paper for the Federal Reserve Bank of Atlanta. In Canada, the banking system was not used as a means of channeling subsidized credit to a favored political constituency, so there was no need to tolerate instability. The legacy of that today is a malleable U.S. banking system that, among other things, was deregulated in the late 1990s at the behest of banks themselves  which contributed to the 2008 collapse.

The financial crisis and the abuses that led to it are still holding back the U.S. economy. Shoddy lending standards were a major cause of the housing bust, which has whacked $3 trillion off the value of Americans real-estate assets  even with the year-long recovery in the housing market. Thats a huge loss of wealth that continues to hold back U.S. spending. And its just part of a 25-year debt binge Americans are still working off. With far fewer lending excesses, Canada didnt really have a housing bust or a credit crisis to recover from.

Money doesnt dominate politics. Canada has much stricter rules governing campaign contributions than those in America, where campaign-finance laws are getting weaker on account of recent Supreme Court rulings striking down limits on spending. Tougher limits in Canada give people and businesses with money to spend less influence over laws and regulations. Every single one of my voters thinks that is terrific, says former journalist ChrystiaFreeland, now a Canadian member of parliament, representing a district in Toronto. There is a lot less influence of the really wealthy and single-issue interest groups. A regular person has a much bigger voice.

Many members of the U.S. Congress report spending half their time, or more, raising money for reelection efforts rather than legislating. Freeland estimates she spends less than 5% of her time doing that. Theres virtually no chance the United States will ever adopt a Canadian-style parliamentary system, but Congress could pass new laws or amend the Constitution in order to limit the corrupting influence of Big Money in politics. Were that to happen, however, it would probably make incumbent politicians more vulnerable to challengers. Maybe next century.

Theres less hostility toward immigrants. Canada, like the United States, has limits on the number of foreigners it allows into the country to work. But the whole issue of immigration is far less politicized, and theres a broad understanding that skilled foreign workers help the economy. Canada actually recruits immigrants, part of a deliberate effort to attract talented foreigners most likely to contribute to economic growth. In the United States, the quota for skilled immigrants is far below the number U.S. firms would hire if they could get them. Despite appeals from many businesses, Congress is paralyzed on reforms that would let more skilled immigrants in, partly because that issue gets conflated with separate reforms aimed at stemming the flow of unskilled illegals.

Canada has its own problems, needless to say. Its government-run healthcare system draws complaints of long wait times for care and trailing-edge medical technology. Some economists think a housing bubble may be forming, for instance, and trends such as rising income inequality affect Canada just as they do every other industrialized country. Plus, it’s cold.

In the Land of Moderation, however, such challenges seem manageable. Were less anxious because we didnt have the financial crisis, says Freeland, but Canadians should guard against smugness. Now there’s something you’re unlikely to hear an American politician say.

— Siemond Chan contributed to this article.

2018-02-26
Previous Post: Illinois netted a loss of more $20 billion to other states through the out-migration of its residents ….
Next Post: BRICS establish $100bn bank and currency reserves to cut out Western dominance