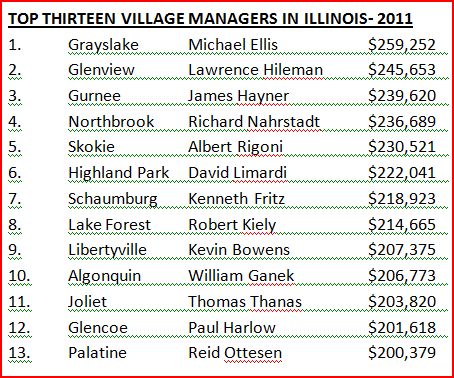 State of Illinois: are they public servants or an elite bureaucracy? You decide (#1)

By: Italian - Polish
In: Economics
With: 0 Comments

State of Illinois: are they public servants or an elite bureaucracy? You decide (#1)

Our Big Dog Report on highly compensated Village Managers has received much interest, here is a ranking of the Top 13.

See the Top 10 Village Manager Salaries in Illinois. The highest paid is a village manager of small Grayslake at $251,152. Review last years report,

Occupying our state pension systems are private employers like Illinois Association of Park Districts (PeterMurphy, $322,444), and Park District Risk Management Association (Brett Davis, $297,901). Taxpayers have no control over the salaries, but pay for the pensions. Murphy received a 2012 salary spike of $40,000, and Davis has tripled his pay in ten years.

Other Highly Compensated Bureaucrats include:

Dennis Gianopolus- extracted nearly $260,000 while simultaneously working as the General Counsel of Calumet City, serving as a prosecutor for Chicago Heights, and running his own law firm.

2018-02-26
Previous Post: EVENTI ITALIANI A CHICAGO E DINTORNI
Next Post: State of Illinois: are they public servants or an elite bureaucracy? You decide (#2)