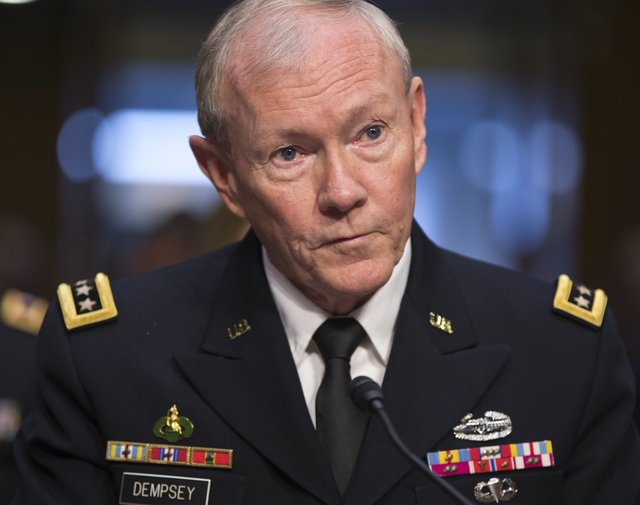 LASK, Poland (Reuters) – The top U.S. military officer said on Wednesday he was cautious over recommending armed intervention in Syria, concerned that ill-conceived action could turn the country into a failed state.

“Before I would recommend a military solution … I would have to be convinced that the aftermath of the military option would not lead to a failed state in which the suffering would actually be worse,” Army General Martin Dempsey, the chairman of the Joint Chiefs of Staff, told reporters.

Speaking at a Polish air force base in Lask, central Poland, where U.S. pilots conduct exercises with their Polish counterparts on F-16 jets, Dempsey said political leaders must consider other options along with military action to provide relief to the Syrian people.

“I’m not suggesting that the international community do nothing. I am suggesting that you need a strategy to tie military options with other instruments of power,” he said.

The United States has wavered over what action to take in Syria, where it has demanded the exit of President Bashar al-Assad, who has fought for two and a half years against rebels in a civil war that has killed 100,000 people.

In a letter released on Monday, Dempsey outlined five options the U.S. military was prepared to undertake, from providing training to establishing no-fly zones or conducting limited attacks on military targets.

The letter prompted Republican Senator John McCain, an outspoken proponent of military aid for the rebels, to say he no longer planned to delay Dempsey’s nomination to a second term atop the U.S. military.

In his letter to McCain and Democratic Senator Carl Levin, the head of the Senate Armed Services Committee, Dempsey warned that involvement in Syria would be an act of war that could cost billions of dollars.

The U.S. military’s current role in the two-year conflict is limited to delivering humanitarian aid, providing security assistance to Syria’s neighbors and non-lethal help to the Syrian opposition. The U.S. military has an operational headquarters unit in Jordan along with other assets, including F-16 jets.

2018-02-26
Previous Post: It’s a genetic test, but no body parts or blood are being analyzed
Next Post: Independent Voices about protest in Poland September 2013