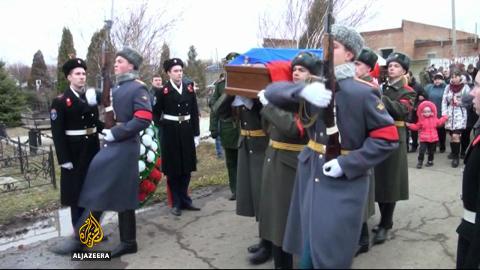 Why Turkish President dampen his rhetoric.

Why Turkish President dampen his rhetoric.

President Recep Tayyip Erdoğan has warned Russia not to “play with fire” but added he did not want to harm relations with Moscow, comments that look more likely to inflame than quell the dispute over a downed Russian bomber this week.

“We very sincerely recommend to Russia not to play with fire,” Erdogan told supporters during a speech in Bayburt, in northeast Turkey. “We really attach a lot of importance to our relations with Russia… We don’t want these relations to suffer harm in any way.”

Erdogan said he may speak with Russian President Vladimir Putin at a climate summit in Paris next week, a discussion that would be welcomed by the United States and EU, both of which fear the spat has distracted from the battle against Islamic State militants in Syria.

Putin has so far refused to contact Erdogan because Ankara does not want to apologize for the downing of the jet, Putin aide Yuri Ushakov said on Friday.

in the western city of Balikesir

. was the first expression of regret by the strongman leader since Tuesday’s incident in which Turkish F-16 jets shot down the Russian jet on grounds that it had violated Turkey’s airspace despite repeated warnings to change course. It was the first time in half a century that a NATO member shot down a Russian plane and drew a harsh response from Moscow

“We are truly saddened by this incident,” Erdogan said. “We wish it hadn’t happened as such, but unfortunately such a thing has happened. I hope that something like this doesn’t occur again.”

Asked why Putin hasn’t picked up the phone to respond to Erdogan’s two phone calls, he said that “we have seen that the Turkish side hasn’t been ready to offer an elementary apology over the plane incident.”

Erdogan said Turkey downed the jet as a result of what he called the automatic enforecement of the rules of engagement.

Russia’s lower house speaker, Sergei Naryshkin, said on Friday that Moscow had the right to make a military response, calling the incident an “intentional murder of our soldiers.”

Russia is to suspend its visa-free agreement with Turkey at the beginning of next year, Russian Foreign Minister Sergey Lavrovhas said and has also started sending back Turkish trucks loaded with exports at the border and stopped Turkish tourists – who normally do not need visas – entering the country.

Erdogan’s friendly overture however, came after he again vigorously defended Turkey’s action and criticized Russia for its operations in Syria.”

“Asked why Putin hasn’t picked up the phone to respond to Erdogan’s two phone calls, he said that “we have seen that the Turkish side hasn’t been ready to offer an elementary apology over the plane incident.”

Instead of “elementary apology” Turks were bragging and celebrating their barbaric actions toward already murdered Russian pilot’s body and Erdogan was applauding. After Putin’s plan to punish Turkey, Erdogan is acting like a typical brownnosing Islam. I hope Putin will do to Turkey what Turkey would do if it was done to them. It is time to dismantle ,, threat to world peace .

The US tax payer does benefit in part, at least for now with a strong dollar and cheap gas; but once this is settled, we are going to be back to paying $5 a gallon due to a weakened dollar, and a likely $25-30 trillion dollar national debt

Comments are closed, but trackbacks and pingbacks are open.