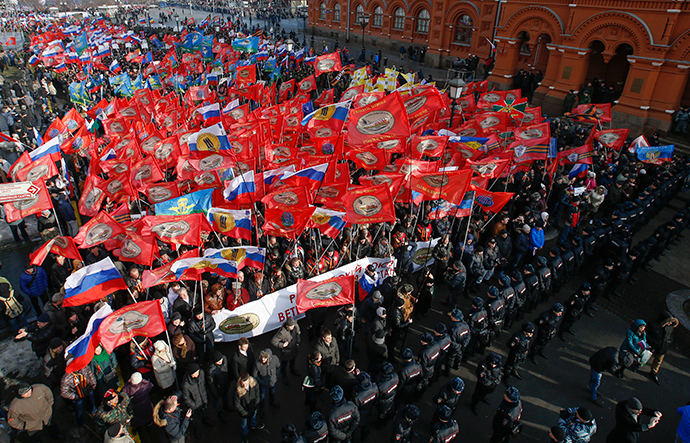 The march had a slogan: A year since Maidan. We wont forget, we wont forgive! The banners people were carrying read: No to Maidan  no to war, Russia against Maidan, Maidan is deceit. According to its organizers, the rally numbered 50,000 people.

Aleksandr Zaldostanov, the leader of Russian motorcycle club The Night Wolves, said: When the mobilization of Russias enemies takes place, I call to rally round Russias president, TASS reported.

The Anti-Maidan movement was founded this January in Moscow by a group of social activists to counter what they believe could pose a threat to Russia. Its main goal is to prevent so-called color revolutions in the country.

2018-02-26
Previous Post: Russian President Vladimir Putin, FIFA president Joseph Blatter and Brazilian President Dilma Rousseff during the official ceremony of handing over the 2018 World Cup signed certificate to Russia
Next Post: …..both British planes has shot down while they were carrying weapons for the ISIL terrorists….